Listening with the love of Christ

This was one of many Facebook posts I made from South Africa during my first trip back. Originally posted March 18, 2018; time references date from then.

“All meaningful relationships start with a conversation and not a presentation,” (source unspecified, quoted this morning by the preacher at our old church in Cape Town).

I want to tell you about Sandile Dlomo, the young man whose picture I shared last Wednesday, and how God put him onto my heart. 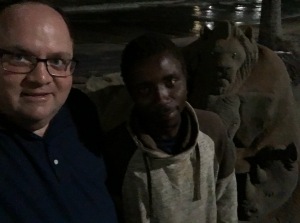 I’ve shared a few of these pictures this trip, really just a portion of the people I’ve met in parking lots or on the street or in other places. I try to balance sharing some of them so that people can learn about others’ lives and pray for them without making every such interaction into a story to share; I try to sincerely and authentically follow the Lord’s leading not just in how I interact with different people but also in whether and how I share about those interactions and people.

I have really enjoyed this trip, and it has been amazingly productive and satisfying. But it has also been long and arduous and exhausting, and I had tried the whole week in Durban to give myself a little rest at the beach. I had really wanted to swim in the warm Indian Ocean, as the Atlantic here in Cape Town is much, much colder even in summer. Every day, though, I’d been unable: half the week I was out of town, most of the rest too busy or exhausted, and once I made it out to the car only to find thunderstorms had begun. Knowing I had to leave for the airport by 6 a.m. the next morning, I realized Wednesday that I’d missed my chance for swimming but decided after a late supper to at least go walk along the beach, get my feet wet, and enjoy some prayer time in God’s creation.

Parking the car, I was immediately approached by about half a dozen people begging for help of some kind or other. It was one of those times that was just overwhelming: too many people, too many needs, too much for me to address, too many opportunities that would distract and prevent me again from doing something I needed. None of us can fix it all, and burnout is common among missionaries, as the needs and opportunities never stop. I genuinely love stopping and talking with car guards and other outsiders here… but I just needed a moment for myself on the beach, so I just walked on. One man was sitting among sand sculptures, just off the sidewalk. I thought I heard him call out to me, but my hearing’s bad enough that I’m not always sure. I prayed an apology that I just couldn’t do it right then, telling God that I just needed to walk along the beach. Soon, the warm waters were easing away the tension from my feet and my heart, and I enjoyed a good prayer walk with my Lord. And through it all, I remembered that He is Lord, and prayed both my thanks for letting me have the moment and my willingness to talk to whomever He wanted me to, especially the man I’d probably ignored. I walked back to an ice cream shop and bought three bottled waters, one for the sculptor and two for whomever else needed one. Within ten feet of leaving the store, two men had each begged a water from me and a third was somewhat angrily demanding the other one, but I explained that it was for the other man and walked on. (I will say here (because it’s important for my final thought but I don’t want to end the story with this) that some of the men approached me aggressively for donations—not violently, but much too eagerly—as I returned to my car and then began arguing over who had been my car guard and whom I should pay for that service. Both walked away angry even though I tipped each of them—and each more than car guards typically receive.)

Approaching the man, I greeted him, introduced myself, asked his name, and sat down on the wall separating the sidewalk from the sand. He was reading a Bible, using the wall as a desk and armrest; he greeted me in return and introduced himself as Sandile. So began slowly a conversation that eventually became full and lasted about an hour. At first I had to keep asking questions, but then, concerned that it might seem too interrogative, I apologized and said that I was a journalist and that questions were simply part of my nature. He said it was fine and that he was glad to talk, and he gradually warmed up. He told me that he was homeless, that he spends his days carving ornate sand sculptures as his way of seeking donations, that the sea washes them mostly away each night, and that he enjoys making something new each day. He told me how local Christians had befriended him and given him the Bible, how he has been enjoying reading it and finds it very interesting (he’s finished Genesis and is in Exodus), how he identifies with God’s promises to deliver the Israelites from their situation in Egypt, and how those Christians had brought him to their church and that he feels very welcome there every time. Once a lot of questions had gotten him going, very few questions were needed, so I mostly let him talk, but I also shared about myself and our family a little, about our missionary work and joy, and about a few other parts of the Bible. I showed him how Luke had begun his gospel and how my work serves a similar purpose, and I encouraged him that he would probably enjoy the Psalms because of how they express such a range of human emotions, including hurt and confusion and anger and doubt, and that God’s including them in his Word shows us that He understands and permits our struggles with such things.

As our talk continued, he shared more and more openly. He told me how he’s 21, with a younger brother and sister, how they have different fathers but he doesn’t know his or even who his was or where or anything, how his mother had died without telling him anything about his father or even where she herself was from, and how lost he feels without any family or homeland to connect to. He has asked the people who knew his mother if they could give him any hints, but they say only that she simply moved to Durban and never told them anything. He talked about wishing he could help his younger siblings but not having any way to do so, about how much it hurts to have no family but them, and about hoping that some day he will find someone who can help him learn who his family is. By this point, he was crying softly and saying how he didn’t know why he was telling me all this, but that he never has anyone to talk to. He said people who know him always see him joyful and joking, and that he doesn’t feel he can open up to them. He said sometimes maybe it’s easier to talk to a stranger. I tried not to reply beyond the simplest, shortest affirmations and encouragements, and to focus as entirely as possible on just listening. I prayed silently throughout his talk for God to help him with his hurts and to help me be helpful and responsive, and I thanked Him repeatedly for giving me the discernment in this interaction to just give Sandile someone who would listen for as long as he needed.

Eventually, he had said all it seemed he needed to for the night, and he thanked me for stopping and talking with him. I got off the wall and knelt next to him in the sand, and we prayed together for a long time, asking God to heal all those hurts and provide peace and answers for all those questions, to provide for him in the daily needs but also in the longer ones, and to keep him and his siblings safe and healthy, and as many other things as I’d perceived or he’d asked me to. He’d told me how he has a shelter he can go to when he has R60 (60 rand, about $5-$6), so I gave him enough cash for three nights, and then I realized I could offer him some more lasting help. I explained what counseling is and how they are very good at listening and helping you talk, even sharing that I had been through counseling as part of our missionary preparation and our recent relocation and had found it difficult sometimes but very worthwhile. Because he was interested, I used my phone to look up “free Christian counseling in Durban,” finding two good referrals but then realizing that for the first time during the trip I had no pen. Sandile produced a plastic spoon and began expertly carving the names and addresses onto two of his sculptures, hoping they would last long enough for him to copy it down the next morning. As we embraced and prepared to part, he kept thanking me for our talk and for how it had made him feel better, and I just kept trying to speak as much of God’s love into him as I could in those parting moments. He said he hopes he will see me again there someday, and I replied that I was very torn about that, because I would like very much to see him again but that I also pray he will have a better situation by the next time I’m in Durban.

The more I interact with people and the more I seek to serve others, the more convinced I am of the importance of providing help within relationship and of the need for those relationships to begin in and rely on dialogue and reciprocity rather than on one-sided delivery, on conversation rather than presentation. And I find that need goes both ways, as there is tremendous difference between the tone and outcome of interactions like we’ve had with Sandile or our car guard friends and those we’ve had with the sort who demand help or seem predatory. Neither the one needing help nor the one providing it should demand or dictate, and both should remember that blessings are reciprocal in relationships, as God entrusts certain resources to each of us and asks us to share them. The joy Sandile gives people through his carvings, the lessons he taught me, the gift of his trust and candor… all of these things are blessings that he is able to offer and chooses to share. Similarly, on Friday night, I met a lady in Cape Town who offers to those around her the blessing of her overwhelming joy. We are to share what God has entrusted to us, and not worry about it being too little or unworthy or less than someone else might offer—and certainly not about it running out if we share it too much or what we might get in return. But when we share in the context of relationship (a healthy one), we generally find that we each are blessed within it.