“When you get home tonight, you must tell your wife, ‘I met a man named Michael, and he called me a good man.'”

There’s a tremendous blessing in such words.

We don’t always know how our words, actions, or example affect others, or even that they are.  I didn’t realize anyone was watching me yesterday at the beach.  I’d seen a microbus parked in the same lot, but it seemed empty.  Three people walked around, busy looking for plough snails as bait. 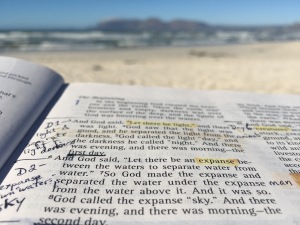 The beach was certainly big enough and deserted enough for the comfort of solitude, and I felt wonderfully alone with God while doing my devotions after I was done taking pictures.

Afterward, I set my camera in the car and sat on the shore, reading my Bible, singing praises, and praying.  I read Genesis 1 while looking at the waters, dry land, plants, birds, and sea creatures it spoke of God creating, things I’d just spent the morning studying so that I might capture a bit of their light and beauty to share with others.

Michael and John had seen, though, and they approached me as I walked back to the office car.  Michael was enjoying his first day off in months, and John was a beachcomber doing his daily work; it wasn’t entirely clear, but I think they’d just met.  John was friendly but quiet, whereas Michael was gregarious and chatty; he made small talk and asked me kindly what I was doing.  I explained why we’re here in Cape Town, what I was doing that morning and how I’d been enjoying such a beautiful example of God’s creation.  They asked me about America and (as often happens here) about the upcoming election.  I don’t like talking politics anymore, but this was about relationship, not beliefs. I shared with them as objectively and humorously as I could.

Each man asked me to pray for him, prompting more talk about God and our relationship with Him and His great love for us.  I asked what prayers they wanted:  Michael asked for guidance to know God’s will, for strength to follow it, for clarity about how to find God; John asked prayers for strength, health, and his daily needs.  After praying together, John said goodbye and went back to work.  Michael stayed, talking about family and introducing me to his, baring some of his heart.  Words from “Hosanna,” by Hillsong United*, came to my mind:

Michael’s concerns and struggles were both universal and individual, and it was a blessing to share a half hour with him and pray for him and his family.  I showed him what love I could as a friend for a morning, and I encouraged them to get connected with a good church that would preach Jesus as the way to the Father (John 14:6), develop longstanding fellowship, and challenge them lovingly when necessary.

“When you get home tonight, you must tell your wife, ‘I met a man named Michael, and he called me a good man,'” he said as we parted.

I don’t know what will come of my attempts to share God’s heart with this man who asked me to, but I wonder if he knows how much he and his words blessed me. 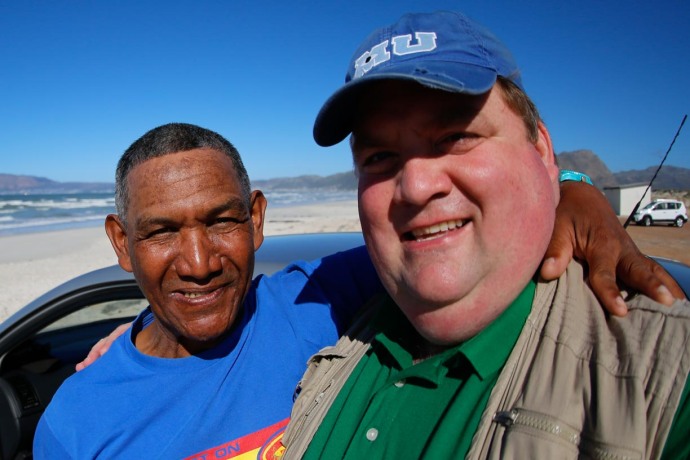 * I didn’t realize it at the time, but Hillsong (the Australian Assemblies of God church out of which the band Hillsong United arose) has six locations in South Africa, including one (Hillsong Mitchells Plain) just minutes from this beach.  Their song “Oceans” was immensely comforting to me as we traveled here in June.